The Dargues Gold Mine is located approximately 60km southeast of Canberra, 13km south of Braidwood and immediately north of the village of Majors Creek. The Dargues Reef ore body was originally discovered in the early 1870’s by Mr. James Dargue. Mining over the next 20 years consisted of sinking the Main Shaft and development of a small open cut. Additional shafts were excavated between 1870 and 1891 and then again between 1914 and 1916 by various parties. Historic gold production from Dargues Reef is estimated at a minimal 2,000t at a grade of 14g/t Au.

Since 2004, in excess of 340 holes have been drilled at Dargues Reef. The identified resources and reserves within the Project were last updated in June 2010, and stand at 1.615Mt @ 6.3g/t Au (327,300 oz of gold). A scoping study confirmed that the project is cash positive at a gold price of $1,150/oz and an average grade of 6g/t Au. The study concluded that the Project would support a viable underground mining operation. Since the initial study a Definitive Feasibility Study and an Environmental Assessment has been conducted and the potential for an even more robust project identified.

The project represents the first new gold mine to be approved in NSW since Lake Cowal more than ten years ago.

403ha of freehold land owned by the Company. 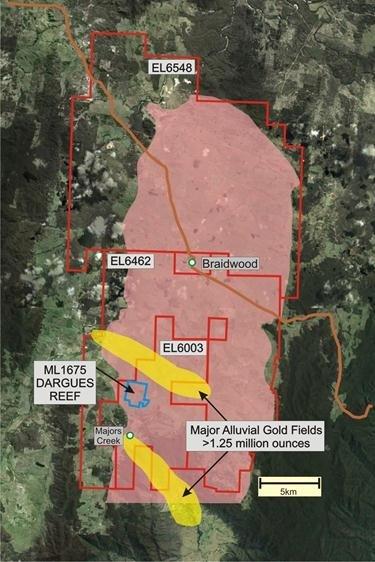 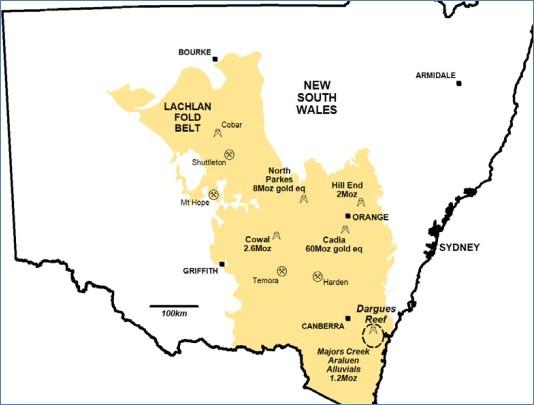 Mining practices will include the following.

The Dargues Reef Definitive Feasibility Study for a +50,000oz pa gold operation has been completed. The underground mine and infrastructure designed. The operation will mine 330,000t pa using conventional long hole open stope mining methods via a decline.

The plant is designed to extract half the gold via a simple gravity process and also produce a sulphide concentrate, containing the other half of the gold. The end result is a state of the art, modern, environmentally friendly gold processing facility designed on the principals of ecologically sustainable development that will boast a very small surface footprint.