The Homase/Akrokerri project (Figure 1) borders the eastern and northern boundaries of Anglo Gold Ashanti's Obuasi permit, which hosts the 42MOz Obuasi deposit. The project is located within the same geological environment as the Obuasi deposit and hosts a previously producing, open pit mine, which is one of GoldStones’ key exploration targets. GoldStone holds a 90% interest in the Homase license, while Akrokerri is 100% GoldStone owned. Geologically, the two permits are located along the same, continuous structure and form part of the same geological environment. 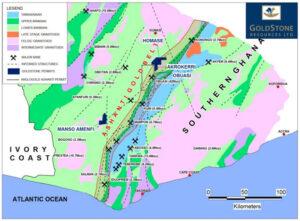 Figure 1: The Homase/Akrokerri project area is comprised of units of the Birimian Formation and lies within the prospective Ashanti Gold Belt, where more than seventy million ounces of gold have been discovered. This prolific belt also includes AngloGold Ashanti’s, 42 Moz, Obuasi Mine and Golden Star’s Prestea Mine.

The area of interest is located in the Bekwai District of the Ashanti Region in Ghana, close to the town of Obuasi. Together the Akrokerri and Homase permits cover an area of approximately 143 square kilometres and lie only 15km north-east of Anglo-Gold Ashanti's forty two million ounce Obuasi Mine.

The Homase/Akrokerri project is located within the well mineralised Ashanti Gold Belt, where more than seventy million ounces of gold have been discovered. Geologically, the area lies within the same geological environment as the massive Obuasi deposit which has been exploited at surface and underground over the last 100 years.

Exploration History
Shea Gold Limited (“Shea”), a subsidiary of Dominion Mining Limited, a previous explorer in the area, targeted the Homase mineralised trend and drilled more than 300 boreholes during 1998, 1999 and 2000 to quantify the continuous gold mineralisation along more than a three kilometres strike length (Figure 2). 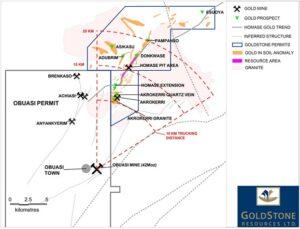 Figure 2: A simplified map of the Homase/Akrokerri project area shows that the area of interest lies in the same geological environment as the forty two million ounce Obuasi Gold Mine. AngloGold Ashanti’s processing plant is within trucking distance of the permit area (15 km from Homase and 10 km from Akrokerri). The map also indicates the area where a gold resource of 602,000 ounces was defined from historical drill data and GoldStones’ 2011/2012 drilling programme. Also indicated are numerous other gold prospects within the permit areas, which add significant exploration upside to the project.

Mining by Ashanti Goldfields
Ashanti Goldfields (“AG”) acquired the Homase License from Shea Limited during 2001 for a production based consideration of approximately US$550,000 and mined ore from two pits (“Homase Pits”) during 2002 and 2003 (Figures 3 and 4).

Mining activities were limited to a strike length of 800 metres of the four kilometre long mineralised zone. The ore was trucked to AG's nearby Obuasi oxide processing plant and approximately 40,000 ounces of gold were recovered at a reported recoverable grade varying between 2.6 - 2.7 g/t.

AG ceased mining operations in the Homase License area during 2003 at a time when the gold price fluctuated between US$320 and US$380 per ounce and at a reported operating cost of US$220 and $280 per ounce. 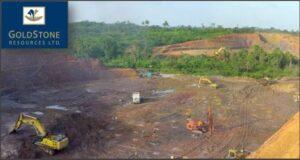 Figure 3: A photograph of the Homase Pit, taken during 2002 when the pit was still mined by Ashanti Goldfields. 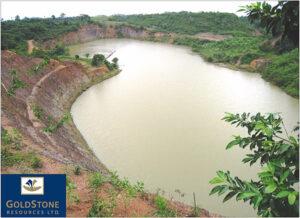 Figure 4: A photograph of the Homase Pit (also shown in Figure 3), looking north, taken during 2009. The long axis of the pit measures approximately 700 metres. GoldStones’ drilling programme has confirmed that high grade mineralisation under the pit extends down dip, below 200m and remains open at depth and along strike.

GoldStones’ Drilling Programme
To date 51drill holes, totalling 14,376 metres, have been completed by GoldStone in the Homase/Akrokerri project area. All holes targeted at direct extensions of the Homase/Akrokerri gold resource intersected the mineralised unit, demonstrating the consistency of the mineralisation trend over a significant strike length and at depth. GoldStone is confident that with further exploration further potential can be realised.

Table 1: Presented are all the results of GoldStone's 2011 – 2012 drill campaign in the Homase/Akrokerri project area. Of note is that all holes aimed at direct extensions of the existing gold resource intersected mineralisation, pointing to a robust and consistent ore body. 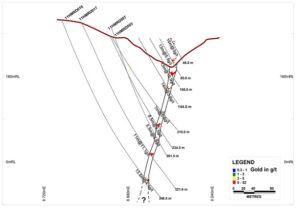 Figure 5: Cross section through the Homase open pit, showing historical and GoldStones’ drilling results, as well as, previously mined out areas. GoldStones’ drill programme (e.g. drill hole 11HMRD003/007/016/017), clearly confirmed that the high-grade mineralisation under the pit extends to depth and has resulted in a resource increase to the current 602,000 ounces. Notably, mineralisation remains open at depth.

JORC Compliant Gold Resource and Additional Resource Potential
Based on historical drill data, as well as, Goldstone’s drilling programme completed between 2011 and 2012, GoldStone updated its JORC compliant gold resource for the Homase/Akrokerri project. The estimate was compiled by SEMS Exploration Services Limited, an independent West African based consulting firm. The resource now stands at 10.6 million tonnes of ore at an average grade of 1.77 g/t gold, containing 602,000 ounces of gold (Tables 2 and 3; Figures 6 and 7). The gold resource extends to a depth of 256m below the bottom of the existing Homase pit. The updated 602,000 ounce gold resource estimate is based on 401 drill holes intercepting mineralisation along 4.4 kilometres of strike. The details of the resource, for which a 0.5 g/t gold cut off was applied, are given in the tables below:

Table 2: Resource classification of the Homase/Akrokerri gold deposit. Notably, a large portion of the resource is classified as measured and indicated.

Table 3: Mineral resource by material, indicating a significant portion of ore located in the oxide zone. 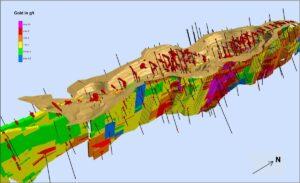 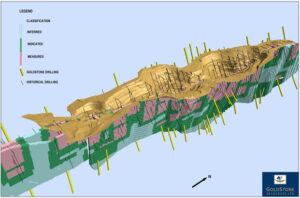 Figure 7: A three dimensional model of the Homase open pit and the gold resource. The ore blocks that could be estimated with the highest degree of confidence (measured category) are shown in pink.

Exploration Potential
In order to define additional gold prospects in the project area the company commissioned magnetic, radiometric, conductivity (VTEM) and chargeability (IP) geophysical surveys and carried out geological mapping, soil sampling and outcrop sampling. The results of these surveys were mainly positive and defined a number of prospects in the permit area (Figure 9) which the company is planning to investigate. These prospects are located within trucking distance of AGAs’ processing facilities, underscoring the potential of the ground package to host numerous satellite deposits.

Figure 9: Overview of prioritised target areas in the Homase/Akrokerri project area. Significantly, all the prospects are within trucking distance of the Obuasi mine.

Namely the prospects are as per following:

High-grade Depth Extensions of Resource (#1 on Figure 9): Mining of the Obuasi gold deposit, in the same geological environment, only fifteen kilometres to the south-west of Homase/Akrokerri, presently extends to a depth just short of 2000 metres. As is evident in the cross section (Figure 5), the deepest intercepts from GoldStones’ drilling campaign confirm mineralisation at a maximum depth of just over 209 metres under the bottom of the existing Homase pit and the results still confirm consistent and robust mineralisation. Considering the afore mentioned depths at which the nearby Obuasi deposit is being exploited, further, deeper drilling is warranted to test the true potential of the deposit at depth.

Direct Homase/Akrokerri Resource Strike Extensions (#2 on Figure 9): Geophysical and geochemical data sets, in conjunction with drilling results of the Homase/Akrokerri deposit, all indicate that extensions of the mineralisation may exist along strike of the existing resource, both to the north-east and south-west. This target has the potential to further add, near surface, ounces to the existing resource.

Adubrim (#3 on Figure 9): Defined by the VTEM survey, the prospect is located on a geological structure which parallels the main Homase/Akrokerri trend. The results of a recently completed geochemical survey further highlight the prospect with an associated gold in soil anomaly.

Akrokerri Granite (#4 on Figure 9): Located in the western part of the Akrokerri permit, this target is defined by a very robust gold in soil anomaly, positive rock samples (with results including values of up 16 g/t Au), as well as, parallel linear zones of artisanal activity. GoldStones’ recent drill campaign which targeted this zone, confirmed the existence of granite hosted, south-west dipping, auriferous quartz veins. The drill results included values of 3m @ 0.5g/t ; 1.2m @ 1.2 g/t and 15m @ 0.5 g/t.

Akrokerri Quartz Vein (#4 on Figure 9): This vein is located close to the Akrokerri granite. Mining to a depth of 114 metres between 1900 and 1909, resulted in the recovery of 75,000 ounces of gold at an average grade of 24 grams per tonne. More recently, Birim Goldfields Ltd (1996 - 1997) and PAR (2008), previous operators of the permit, drilled a total of 16 boreholes to test for potential extensions of mineralisation. GoldStones’ own drill programme targeted and intercepted mineralisation at depths below the extent of historical mining activities (e.g. 12AKDD004 intersected 2.1m @ 6.1 g/t from 309 meters), providing a preliminary indication that mineralisation extends to greater depths. Historical mining activities were limited to only half of the, currently defined, 700 meter long extent of the vein. The company’s geologists are using the results the from latest drill campaign to model the consistency and geometry of the vein system in order to determine its economic viability and an optimal potential follow up programme. Further drilling may be aimed at the vein system to define strike and depth extensions of the gold mineralisation if the modelling returns positive results.

Strike Extension of Homase Mineralised Structure on Northern Side of Cross-Cutting Fault (#5 on Figure 9): The results of the VTEM survey indicate that the structure which controlled the formation of the gold deposit under the Homase pits re-appears on the northern side of a cross-cutting fault and extends into the north-eastern portion of the Homase permit. Further mapping and infill soil sampling is planned to generate drill targets in this area.

Obuasi Structure Extension into Akrokerri Permit (#6 on Figure 9): The results of the VTEM survey together with publically available magnetic data show that the structure which controlled the formation of the massive Obuasi gold deposit extends into the south-eastern corner of the Akrokerri permit. The geophysical data also indicate a jog from a NE direction to a ENE direction of the Obuasi structure within the Akrokerri permit area. Immediately south of the permit boundary, the same structure is being explored by Pelangio, who have demonstrated that mineralisation extends along the same structure between Obuasi and Akrokerri.

Homase: Joint Venture Agreement
GoldStone presently holds a 65% interest in the Homase License. The interest in the License can be increased to 85%, subject to completion of a successful feasibility study over the area and payment of US$60,000 in participation fees to the Joint Venture partner. The Agreement envisions the creation of a Joint Venture Company upon commencement of a development programme, to whom the Homase License and/or any ensuing mining licenses will be transferred in proportion to the respective interests held by GoldStone and Cherry Hill.

Ghana
Ghana, formerly the Gold Coast, is Africa's second largest gold producing country after South Africa with over 55 million ounces of gold having been mined over the last century. Gold mining contributes approximately 45% of the country's gross export earnings and mining generally enjoys a preferred status with a regulatory system that encourages further investment. Ghana has a stable and well established democratic system and has attracted most of the world's major gold producers including AngloGold Ashanti, Newmont, Golden Star and Goldfields.

Regulatory Environment
In terms of Ghanaian law the Government of Ghana is entitled to a 10% free carried interest in any mining ventures and Ghana's Minerals Act stipulates a mining royalty of not more than 6% and not less than 3% of the total revenue obtained from mining operations. The Corporate tax rate for Ghanaian Companies and for income derived from Ghana is 25% and dividends attract a withholding tax of 8%.