The Company entered into a joint venture agreement with Asasemu Mining, a Ghanaian company, to develop the Manso Amenfi Prospecting License. Through the agreement GoldStone has the right to earn up to 85% interest in the permit. The Manso Amenfi License is situated in the Wasa Amenfi West District of the Western Region in Ghana, approximately 30 km from the town of Tarkwa and approximately 250 km west of the capital Accra (Figure 1). The permit is approximately 83 square kilometres in extent.

Figure 1: The Manso Amenfi permit is approximately 110 km south-west of the Homase permit and along strike of the Salman (2.1 Moz) and Edikan (5.3 Moz) gold deposits. The rocks in the permit area belong to the volcano-sedimentary sequence of the lower Birimian.

The Manso Amenfi License is prospective because it lies along strike of a zone of intense artisanal gold mining and the Edikan gold deposit (formerly named the Ayanfuri deposit), where Perseus Mining Limited defined a gold resource of 5.3 Moz (Figure 2). The intersection of the Salman structure, which controlled the formation of Adamus Resources Ltd.’s Salman gold deposit (2.1 Moz), and the Ayanfuri structure abuts the eastern boundary of the License and will be a priority exploration target. Other regional exploration targets include the margins of granitic intrusions in the permit area. Similar intrusions are known to have controlled the formation of gold mineralisation elsewhere in the Ashanti gold belt. 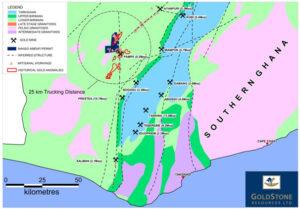 Figure 2: Regional prospectivity of the Manso Amenfi License. The area of interest contains several historical gold in soil anomalies and is close to the intersection of two major, gold fertile structures. The margins of granite intrusions in the permit area form additional exploration targets. The permit is also within trucking distance of Golden Star Resources' Bogoso processing plant.

A soil sampling programme covering the entire permit area was completed during 2011. A total of 2,070 samples were collected every 100 metres along north-west trending lines 400 metres apart. Of the samples taken, 378 had anomalous gold concentrations ranging from 20 parts per billion to 2.4 g/t. The results clearly demonstrated the presence of multiple, robust and elongated gold in soil anomalies. The strikes of the anomalies appear to be parallel to the gold-fertile Salman and Ayanfuri structural corridors. During the field programme our geologists also located various artisanal gold mining sites in the permit area. These seem to be exploiting alluvial gold deposits, some of which are in the same catchments where gold in soil anomalies were identified.

A high-resolution airborne magnetic and radiometric survey was conducted by XCalibur Airborne Geophysics in October 2012 and increased our general understanding of the geology of the permit area. The survey detected numerous structures coincident with the identified gold anomalies. The survey results will also assist the Company's exploration team in re-interpreting the gold-in-soil anomalies and in guiding future drill programmes.

In February 2013 the Company announced the results of an infill soil sampling programme focused on gold target areas that were previously identified when the entire permit area was soil sampled on a 100 metre by 400 metre sampling grid. The infill programme was carried out to a reduced spacing of 50 metres by 200 metres (Figure 3). The results resolved the targeted anomalies in more detail and confirmed that the strike of identified surface anomalies is generally parallel to the gold fertile regional Ayanfuri and Salman structures. 130 of the 1,303 samples yielded gold concentrations between 0.1 g/t and 0.5 g/t and 13 samples between 0.5 g/t and 3.7 g/t. The work programme planned for 2013 includes an extensive trenching programme and possibly follow up drilling. 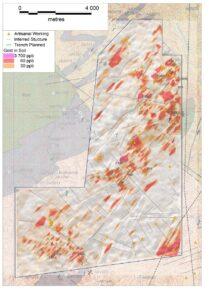 The license area is within trucking distance (25 km) of Golden Star Resources' ("GSR") Bogoso processing plant. The viability of ore trucking in the area has been demonstrated by GSR who truck ore from their Pampe gold mine, less than five kilometres from the Manso Amenfi License, to their Bogoso plant. The proximity of the Manso Amenfi permit to the processing plant increases the chances of any discovered gold deposit being economically viable. Future exploration of the concession will therefore be guided by the principles of "brown fields exploration"; i.e. directed not only to discover large, stand alone, gold deposits but also to define smaller gold resources that could serve as satellite feeders to the Bogoso plant. This strategy will significantly reduce the discovery risk.