Exploration at Henty will be focused in two key areas: peripheral zones, which have potential to incremental mine life extensions, and new systems, with potential to materially increase mine life and production.

The long section below illustrates some of the peripheral target zones. Most of the ore bodies within the Mt Read Volcanics have exhibited a tendency to persist with depth (i.e. Mt Lyell and Rosebery). Despite this, there has been a minimal amount of deep drilling at Henty. There is no known geological impediment to repetitions of the entire Henty ore system at depth. 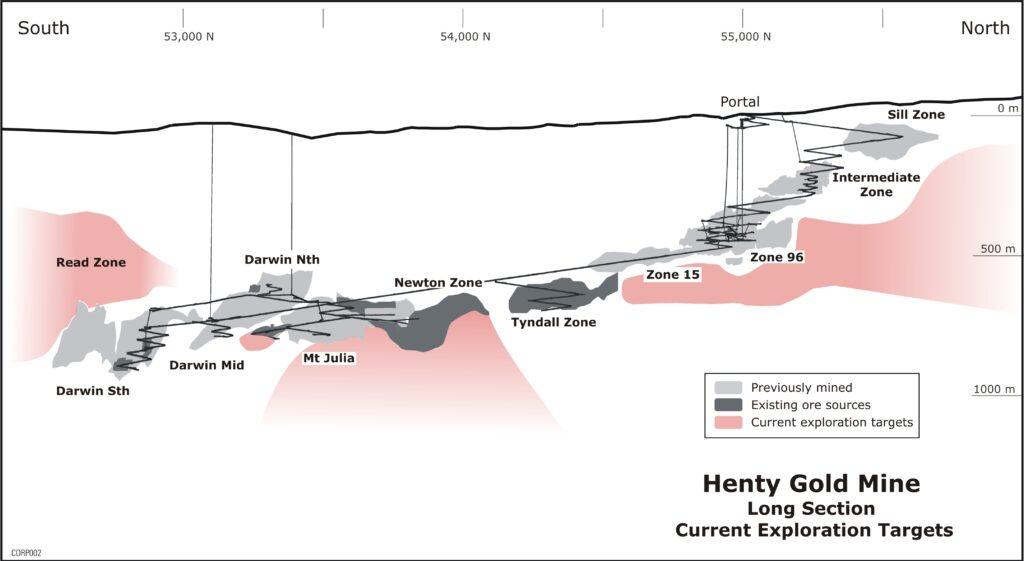 The two Henty mining leases and six exploration leases comprise approximately 160 square kilometres of contiguous land holdings. These leases generally straddle the north-north-east to south-south-west trend of the North Henty, South Henty and Great Lyell Faults. The ground along and in proximity to these faults is highly prospective, and the region as a whole is recognized as an area of great mineral potential. 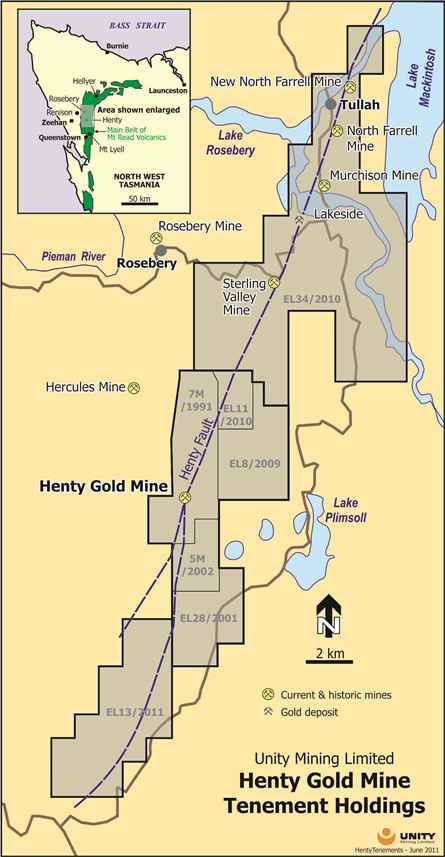 The Henty deposit consists of two mineralised trends. There is the Main Henty Trend, which consists of the Sill, Zone 96, Intermediate, Zone 15, Tyndall, Newton and Mt Julia lenses and there is the Darwin Trend, which hosts the North, Mid and Darwin South lenses. The former extends along the Henty Fault, the latter strikes in a south-easterly direction, away from the fault.

This prospect is the southerly extension of the Main Henty Trend, along and adjacent to the Henty Fault, and extends through the southern Mine Lease, into EL 28/2001, and then into EL 13/2011. This target has received little attention in the past, as drilling was concentrated on southern extensions of the Darwin Zone. However, in August 2010 the Company announced that recent drilling had intersected high grade mineralisation in two drill holes, discovering the Read Zone mineralisation and confirming the continuation of the Main Henty Trend mineralisation south along the fault. Drilling is continuing from surface and underground, to test this extensive target zone. 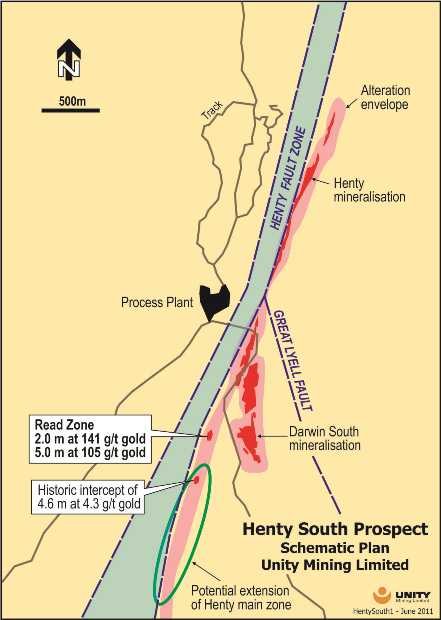 Located less than 2 km to the north of Henty, the Aurora prospect is a 1.5 km long zone that contains widespread alteration, co-incident with a gold in soil anomaly and a strong IP anomaly, which is yet to be tested by drilling. Drilling will commence here in the September quarter of 2011.

Recent drilling in this zone intersected weak chalcopyrite and gold mineralisation in altered basalts, over several intervals between 27 m and 100 m below surface. These included 0.3 m at 2.2 % copper and 0.15 g/t gold, 7.0 m at 0.34% copper and 1.3 m at 0.93 % copper and 0.08 g/t gold. At Henty itself the best gold grades are very often associated with late chalcopyrite mineralisation of the type seen in the Platter Zone. These results suggest that the Platter Zone has experienced an influx of mineralising fluids which may well be of the same age and composition as those that formed the Henty mineralisation. Work in this area is now focused on looking for hard, brittle siliceous rock types within the zone as these are a likely host for ore-grade gold mineralisation.

The Red Hills Prospect lies four kilometres to the NE of Henty. Previous drilling in the area has delineated a thin base metal horizon, with a best down hole intercept of 2.8 m at 34.5 % zinc, 11.3 % lead, 250 g/t silver and 6.5 g/t gold. Unity has conducted follow-up drilling around this intercept and in doing so, has identified a parallel, narrow, gold-rich horizon. This configuration is in some ways similar to Henty, where a base metal zone runs parallel to the gold lenses through much of the deposit. Follow-up drilling to test the gold and base metals zones is planned. 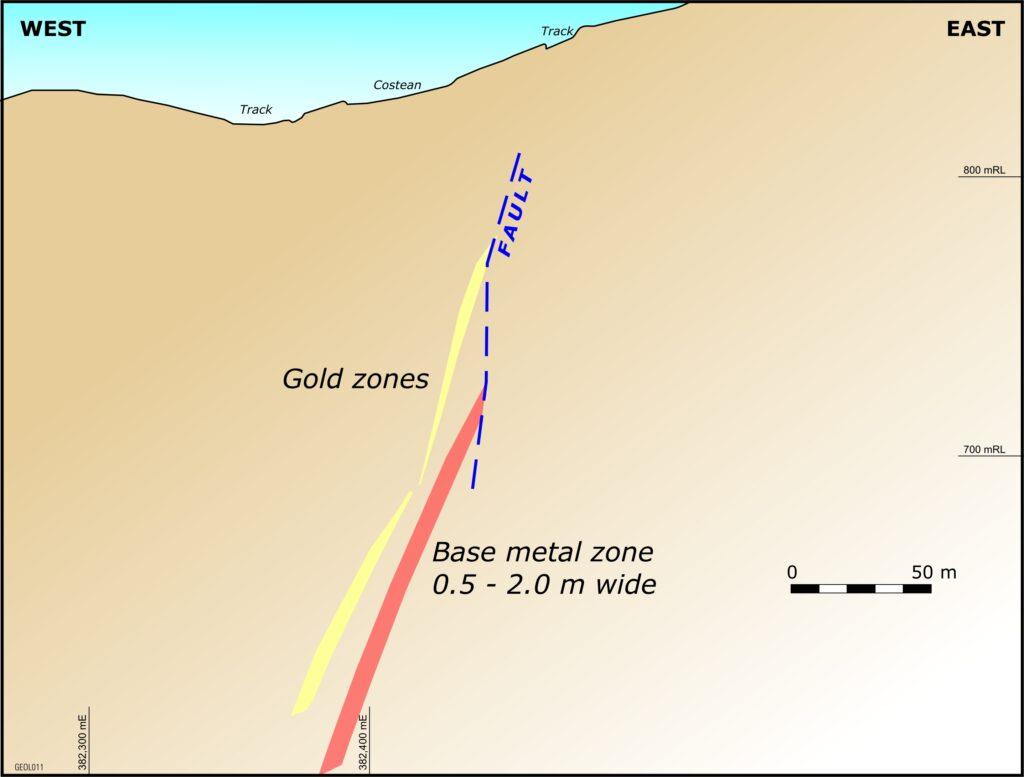 North along the Henty Fault

Drilling continues to the immediate north of Henty Mine, looking for extensions to the mineralisation and for the altered rock types that host the Henty deposit. Further north, along the Henty Fault, more untested and partly-tested prospects are encountered that offer the potential for future exploration.

The Moxon prospect lies four kilometres NNE of Henty Mine. The area is structurally analogous to Henty, where NW-trending structures intersect the Henty Fault. These structures possibly assist in dilating the prospective package of rocks to allow the gold-bearing fluids to be introduced.

Altered rocks recorded at surface and at an historic IP anomaly makes this prospect an attractive target. Drilling is planned for this prospect.

This is a five kilometre long zone of known gold mineralisation, which includes the Lakeside resource (750,000 t at 2.8 g/t for 66,000 ounces gold). The host rocks are of similar age but a different type to Henty, however, like Henty, mineralisation is clearly linked to the Henty Fault. Drilling will shortly commence at Lakeside and further holes are planned into areas of structural complexity, where dilation of the rocks may have facilitated gold mineralisation.