The first results from the underground drilling program being conducted from the Swan decline were positive and have confirmed the repetition of ribbons beneath the historic workings on  the Sheepshead and Deborah lines of reef. The thesis that ribbons, which control gold mineralisation in Bendigo, repeat with depth beneath historic workings, is central to the Company's announced 10 million-ounce gold potential of the New Bendigo. 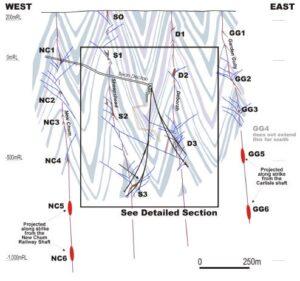 A cross section through the southern portion of the Bendigo Goldfield including the New Chum, Sheepshead, Deborah and Garden Gully lines of reef. The recently identified D3 and S3 ribbons are shown relative to historically mined ribbons. The deepest mined ribbons on the New Chum and Garden Gully lines have been projected onto the section and are deeper than the D3 and S3 ribbons.

The underground drilling will continue to further define the ribbon structures and identify targets within them for grade determination by bulk sampling. The bulk sampling program is scheduled to commence in the first quarter of 2001.

A ribbon on the Sheepshead line of reef has been intersected approximately 300 metres below the historically mined S2 ribbon. A 30 metre down-hole interval of quartz stockwork mineralisation with favourable sulphides was intersected 40 metres east of the anticline axis.

On the Deborah line of reef a ribbon was intersected 250 metres beneath the main historic workings. This ribbon includes the New Formation reef, which was bulk sampled in 1954 from a winze and reported 130t @ 9.3gAu/t (recovered). Drill testing confirmed the New Formation reef with results correlating well with reports circa 1954. Deeper drilling showed the ribbon to  extend a further 80 metres down with a 16 metre down-hole intersection of quartz stockwork mineralisation with sulphides and some visible gold.

Core samples from the drilling program are being systematically sampled and analysed for a variety of elements. Due to the erratic distribution of gold, typical of Bendigo, gold assays of the small core samples are not representative but a suite of associated elements will assist in our understanding of the mineralisation.

The first objective of the drilling program has been met with the confirmation of mineralised ribbon structures beneath the historic workings on both the Deborah and Sheepshead lines of reef. The ongoing drilling program will further define the structures within the ribbons and identify targets for grade determination by bulk sampling.

The Swan decline has advanced to over 3,000 metres and is on schedule to reach the target length of 4,300 metres in the first quarter of 2001. At that time the bulk sampling program will begin.

Surface drilling some 6 kilometres north of the Swan decline has commenced. This drilling is designed to confirm the ribbon repeat theory in the north of the Bendigo goldfield, below historic workings, down to a depth of 1500 metres. The first hole has been collared on the New Chum line of reef and is some 600 metres down. Each hole is expected to take 3 months to complete.