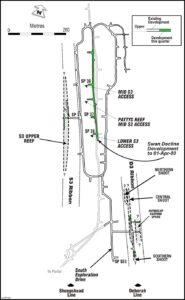 The Swan decline reached the planned depth for this phase of exploration, being 830 metres below surface, which corresponds with the access point to the Lower S3 reefs. Development will now focus on accessing and testing additional reefs in the Mid and Lower S3 ribbon. During the quarter, 125 metres of exploration development were completed in the D3 ribbon and Upper S3 reef. Access crosscuts were also commenced to the Mid and Lower S3 reefs.

Exploration within the reefs continued to focus on the identification of boundaries to mineralisation and resource envelopes. The understanding of the structural controls to mineralisation was also substantially advanced. As expected, gold distribution is not entirely coincident with quartz distribution in the reefs at Bendigo and, as a consequence, a detailed understanding of the structural controls to gold mineralisation within individual reefs is required to successfully define Resources and Reserves.

Sufficient exploration has now been completed to identify both the resource envelopes, and the structural controls to gold mineralisation within the reefs in the D3 ribbon and the Upper S3 reef. The Company is on schedule to delineate Indicated Resources and Probable Reserves within these reefs in the June 2003 quarter.

During the quarter, 50 metres of development were completed in the D3 East Leg and Shywolup reefs. An additional 6 bulk samples were processed and a further 53 drill intersections into the reefs were also completed. A total of 300 metres of strike length have now been tested with the reefs being open both to the north and south.

This exploration has defined 3 areas with potential economic mineralisation:

Indicated Resources and Probable Reserves will be delineated in the D3 ribbon during the June quarter. 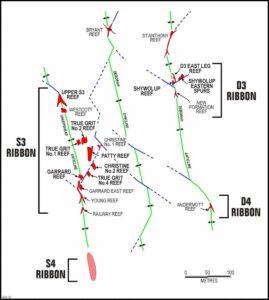 Testing during the quarter included 30 metres of development in 2 crosscuts and processing of 3 bulk samples. The controls on gold mineralisation within this large stockwork system are yet to be determined with all available data being reviewed before additional test work is undertaken.

The McDermott reef in the D4 ribbon was drill tested on a second section some 120 metres to the south, 6 drill holes tested the target zone with visible gold seen in the reef position.

During the quarter, 50 metres of on-reef development were completed in the Upper S3 Reef. This development was to the south on the west leg of the reef and examined the continuity of grade on the margins of the identified mineralised envelope. An additional 2 bulk samples were collected for processing.

Drilling has now identified the reef over a strike length of 400 metres and it remains open to the north and south. A further 23 drill intersections into the reef was completed during the quarter. Drilling is now complete on 9 drill sections with another 4 drill sections planned.

As well as the extra drilling, some vertical development is planned to test grade continuity. Processing of a series of 1,000 tonne parcels of reef material through the New Moon pilot plant is scheduled to verify grade estimation procedures. Delineation of Indicated Resources and Probable Reserves within the Upper S3 reef is planned in the June quarter.

A total of 28 drill intersections were completed into the Mid S3 reefs, and the development of access crosscuts into the Patty and True Grit No 1 and 2 reefs was commenced.

A further 5 holes were drilled in Christine No 2 and adjacent reefs in the Lower S3. The decline is now at the position where the reef can be accessed and this is planned for the coming quarter.

No drill testing of this ribbon was conducted during the quarter.

Processing of trial ore parcels commenced at the New Moon pilot plant during the quarter. These parcels are from the on-reef exploration development and are 1,000 tonnes or greater in size. The first parcel of material, comprising about 6,000 tonnes, is from development within the D3 ribbon. The gold recovered from these tests will help verify grade estimation procedures within the reefs.

Since the quarter’s end an Intensive Leach Reactor has been commissioned to process the gravity concentrate and produce gold dore. This and components of the gravity circuit are of equivalent size and specification to those used in a commercial processing facility. Their use in the pilot plant will test their effectiveness and help optimize the production process flow sheet.