In reporting the best estimate of drill grade, the Company mathematically transforms raw assays due to the coarse-grained nature and erratic distribution of gold at Bendigo. The transformation is based on extensive bulk-sample experience.

Bendigo Mining Limited is developing one of the world’s largest and highest-grade new gold projects. The Bendigo Goldfield produced some 22 million ounces of gold over a century of mining, and today is estimated to contain high-grade gold mineralisation of over 11 million ounces beneath the historic workings. Once fully developed, the mine is planned to produce over 600,000 ounces of gold a year for more than 20 years, which would position Bendigo Mining as one of Australia’s largest long-life gold producers. Phase 1 production is planned to commence by June 2006 at a rate of 120,000 oz/y and build to 200,000 oz/y after three years, with full-scale production of 600,000 oz/y planned to commence in 2011/12.

The project is being developed in two phases as the central portion of the orebody is located directly under the City of Bendigo and the mineralised system is at least 10 km long. The plan is to access the orebody from the southern and northern extremities of the field, with decline ramp access and a dedicated process plant at each end of the field. Mining is planned to occur over the full length of the mineralised system from depths of approximately 750 m to 1,500 m.

Significant progress is being made in building a large underground mine and supporting infrastructure. The increased demand for people and equipment across the industry is leading to cost inflation of many key inputs. The current state of the resource industry is also leading to inefficiencies and lower productivity in some important areas. On the positive side, and despite the cost pressures, the near term operating margin at the Kangaroo Flat Mine could be higher than previously planned due to the record A$ gold price. The Company's lack of gold hedging ensures revenues are fully exposed to changes in the A$ gold price.

The project remains on track for the first gold pour by the end of June 2006. The main risks to achieving this objective are adverse weather and performance of plant construction labour.

As gold production approaches, it is important to highlight that, as is the case with many new underground mines, early grade volatility is anticipated. The initial head grade could range from 7-9 g/t gold for the first quarter or so, as stoping methods are refined, the plant is commissioned and operating systems and procedures are bedded down.

Overall site construction is 83% complete, with commissioning scheduled for next quarter. The capital cost guidance for the plant remains at $57 million.

Process operators and maintenance personnel have been appointed in preparation for production. The dry/wet commissioning strategy has been finalised and the current plan is for some elements of the circuit to commence commissioning in early June. The first gold pour is planned to occur by the end of June with commissioning of certain sections of the plant continuing after June.

Adam St Circuit
A turnaround in performance has been achieved at the Adam St vent rise. Reaming of the rise was completed in early April and the full ventilation circuit is planned to be commissioned in May. Production at the Kangaroo Flat Mine is not affected under this timetable.

Leg 1 of the Adam St rise is 3.5 m in diameter and 334 m long and was reported as behind schedule last quarter due to equipment reliability issues. The rise was completed in early April with the use of an alternative raisebore contractor.

North Deborah Circuit
Collar preparation of the 4 m diameter Leg 1 of the North Deborah vent shaft has been completed. The pilot hole is expected to commence in May.

Development of Leg 2 of the North Deborah circuit, some 700 m north of the Adam St circuit, has been postponed pending completion of the Adams St circuit.

Mine dewatering is an important element of the Bendigo project. The current programme is being accelerated with the objective of dewatering some 8,000 ML from the historic mine workings over the next 6 years.

Dewatering currently occurs at a rate of around 3 ML/d; of which 0.7 ML/d is treated through a reverse osmosis plant at our New Moon facility and discharged into local Lake Neanger, with the remainder pumped to Woodvale for evaporation. The plan is to increase dewatering rates to 8 ML/d by the end of the year.

To support the increase in dewatering, significant work has been completed at the Woodvale evaporation ponds facility. Pond 7, which contains a layered levee system, is now operational (see below).

As planned, the move to owner-mining occurred on 2 April 2006. Positions were offered to Macmahon employees during the quarter and the Company has been pleased with the very high level of acceptances.

Mine activity continues to be restricted by limited ventilation as a result of delays in completing the Adam St vent circuit (see Infrastructure). However, the move to owner-mining, the introduction of larger haul trucks, the optimisation of in-cycle shotcreting, and increased ventilation after May should support increased rates of development.

Underground development of 1,119 m (1,151 m in the December quarter) was completed in the quarter. In March, a record monthly rate of development of 441 m was achieved.

Development priority was given to the continued extension of the north drive, which is required for drill platform and ultimately for a link to the Eaglehawk Mine. The north drive advanced 147 m and is now 458 m north of the Swan decline (page 8 for location).

Other priority development areas include the south decline, to gain access to the Alexandria reef (S4), and the Swan decline, for access to the deeper more northerly portion of Greater Garrard reef (S3).

Five passing bays in the main Swan decline were constructed in the quarter to allow higher rates of haulage.

Shywolup reef pre-development has been completed and cut-and-fill stoping can commence when required.Sub-level drive development is occurring within the Greater Garrard reef in preparation for up-hole bench mining methods. Several 100 t samples generated from this activity are being processed at the New Moon bulk-sampling circuit. Results will be used to refine grade control methods prior to commercial production.

Stockpiling of 6,400 t of development ore was completed, increasing surface stocks to around 10,000 t in preparation for commissioning of the process plant.

The final components of the initial Bendigo mining fleet were delivered as planned, with two jumbos and two loaders commissioned.

The Company’s fleet currently consists of 3 x Atlas Copco MT5010 50 t trucks, 2 x M2D Atlas Copco jumbos, 2 x Caterpillar Elphinstone loaders plus ancillary support equipment. Orders have been placed for a further truck, jumbo and loader to be delivered by mid year increasing fleet size to planned initial levels of 4 x trucks, 3 x jumbos and 3 x loaders. A longhole drill rig has been ordered and is expected to be delivered by early 2007.

Pre-operational activities including site works have been approved and commenced in the quarter.

The commencement of decline construction at Eaglehawk is now likely to occur in the September 2006 quarter rather than the June quarter of 2006.

The Company has planning permission for gold mining and processing at Eaglehawk under the 1997 Williams United Environment Effects Statement (EES). The current plan involving decline development and conventional surface processing is different in some respects to that contemplated under the original EES (which included open cut mining and heap-leach processing) and modelling indicates there is no significant increase in environmental impact.

The modelling is a necessary step to ensure the Eaglehawk Mine has strong political and community support. A consequence of this additional modelling is a delayed start to decline construction. It is difficult to quantify how this delay will affect the five-year production ramp-up profile, when other factors, such as rates of decline advance, are likely to have a greater influence on the timing of the ramp-up schedule. As such, the Company is still working towards the Eaglehawk Mine commissioning in 2011.

The mine area has been fenced and the clearing and excavation of the mine services area has been completed (see below). Power, water and sewerage are currently being installed to the site. A temporary site office has been established.

The strategy is to employ a roadheader for early decline ramp development to avoid vibrations associated with blasting near surface. The roadheader will be used to mine as far as practical (several hundred metres) through the upper portion of the decline before drilling and blasting commences. A similar technique was used for the Swan decline at the Kangaroo Flat Mine.

The 11 Moz Inferred Resource at Bendigo is supported by the highly repetitive geology of the field. The geological model (ribbon model) predicts the occurrence of gold-bearing reefs repeating vertically every 200-250 metres. Exploration confirms this on the Deborah and Sheepshead Lines and reinforces the reliability of the geological model.

Drilling of 9,278 m of diamond core was completed (similar to the previous quarter of 9,297 m). Key results are:

The drilled portion of the Alexandria reef (S4) has increased in strike length to 1,200 m, from 900 m. The emphasis will now be on gaining detailed information from infill drilling.

There is increased confidence that the McDermott reef (D4) is a continuous high-grade low-tonnage mining target defined over at least 400 m of strike.

The "new reef intersection” reported last quarter, high in the D4 ribbon, may have structural continuity with previous drill results located almost 1 km to the south. The target here is a low-tonnage high-grade reef above, and parallel to, the McDermott reef. 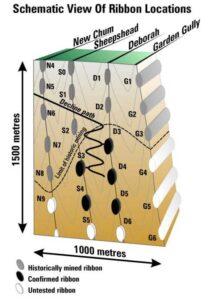 Step-out drilling 200 m south has returned visual indications of a continuous reef (assays pending), with the zone remaining open to the south. A step-out hole 120 m to the north of known mineralisation has also confirmed good reef development. Another big step-out, some 500 m north of this last location, failed to intersect mineralisation at the expected horizon, indicating either a termination of the reef or an area of poor reef development.

The focus will now be directed towards infill drilling on a 40 m horizontal spacing to upgrade Alexandria into a potential Indicated Resource and Probable Reserve. This activity is planned to be conducted from drill platforms located along the south decline as they are made available later this year (see page 6).

Enough information has been gathered to give confidence in the potential for the McDermott reef to be a high-grade low-tonnage orebody. A cross-cut to gain access to the central 400 m portion of the reef is planned. Current reef dimensions suit mining by driving and stripping.

Potential reef above McDermott: Intersected on three sections over 1 km of strike. Remains speculative at this early stage.

This potential reef was indicated by a single drill result received last quarter located high in the D4 ribbon. Assays are now to hand and returned 7 m at 16.5 g/t gold. Further drilling below this result have returned visual mineralisation with free gold over widths of 2-4 m (assays pending).

Adding to this single result are some older drill results (including 7 m at 8.0 g/t gold and 6 m at 17.5 g/t gold) which were intersected in a similar stratigraphic horizon some 1,000 m to the south.

A review of the drill database suggests that these intersections may have some connection and belong to a new reef, found higher in the stratigraphy but paralleling the McDermott reef. The potential is for a continuous high-grade but low-tonnage orebody, similar to McDermott.

On the 17 March Bendigo Mining was admitted to the S&P/ASX200 index.

The financial results for the six months ending December 2005 were released on 16 March. The Company recorded a net loss after tax for the half year of $3.6 million after expensing costs associated with operating the underground mine, administration and exploration.

Mr Peter McCarthy was appointed to the position of Non-Executive Chairman on 20 January.

During the quarter, a report compiled by the Economic Research Unit of La Trobe University, Bendigo was launched detailing the regional economic impact of Bendigo Mining’s operations. Among the key findings of the report were that the Bendigo gold mine could create some 2,100 new jobs within the Bendigo and surrounding community and add some A$600 million a year to regional output.