In this document, the term “resource potential” is used to describe the Company’s estimate of the contained ounces of gold which it believes, on the basis of a technical evaluation of available data and geological extrapolation, should occur within the New Bendigo. It is emphasised that this term is not covered by the JORC Code and is not equivalent to a Mineral Resource or Ore Reserve estimate.

Exploration during the quarter focussed on the Greater Garrard mineralisation in the lower portion of the S3 ribbon. The Greater Garrard mineralisation is more than 600 metres long and typically 10 metres wide and 20 to 30 metres high. It contains the previously identified Young, Garrard, Garrard East and True Grit No 4 gold bearing reefs in a single, broad, mineralised envelope associated with the Garrard fault. It is within the upper part of this envelope that a high grade zone was found, typical of the high grade gold areas that were found historically throughout the Bendigo Goldfield .

The high grade zone has been exposed for 140 metres with initial sample grades of 15-30 g/t Au. During the quarter over 5,000 tonnes of mineralised reef from this development has been processed through the Company’s New Moon plant confirming the high grades from the initial sampling. The high grade zone is still open to the north and detailed drilling indicates an average width of 8 metres.

Development within the upper part of the Greater Garrard mineralisation was halted and the lower portion around Young reef was accessed at the beginning of October. All remaining development is on schedule for completion by late October with detailed drilling to be completed by mid November. This will complete the underground exploration necessary for the feasibility study.

During the quarter there were significant advances in analysing and interpreting drill core data to enable the modelling of grade distribution within individual reefs. Until recently the high nugget effect present in the Bendigo Goldfield has complicated the meaningful interpretation of drill information to determine grade distribution within the reefs. The breakthrough has come about through the application of a statistical analysis that partially compensates for the high nugget effect and focuses on the mineralisation characteristics of the reef.

The application of this method has the potential to identify areas of higher and lower grade mineralisation within the reefs and can be calibrated with the bulk sample results and geological observations to ensure that the interpretations are valid. It will be used to model the grade distribution within the current resources so as to optimise the mining.

Drilling into the S4 ribbon is now complete on 3 drill sections with a final section to be completed in October – November, extending the strike length tested to 450 metres. An Inferred Resource estimate for the S4 mineralisation is scheduled for December.

As the current phase of underground exploration draws to a close, the underground development work will be suspended as from the end of October at which time the mining contractor will demobilise. The processing of bulk samples and the analysis and interpretation of exploration data will continue so as to meet the deadlines for the feasibility study that is underway.

Underground development work is planned to resume again when a decision is made to prepare a mine for commercial production.

Work on the permitting necessary for production continued during the quarter and all required permitting is planned to be completed by the June Quarter 2004.
Funding options are also being studied, with the view to commencing development and construction for Stage One Production as soon as practical. 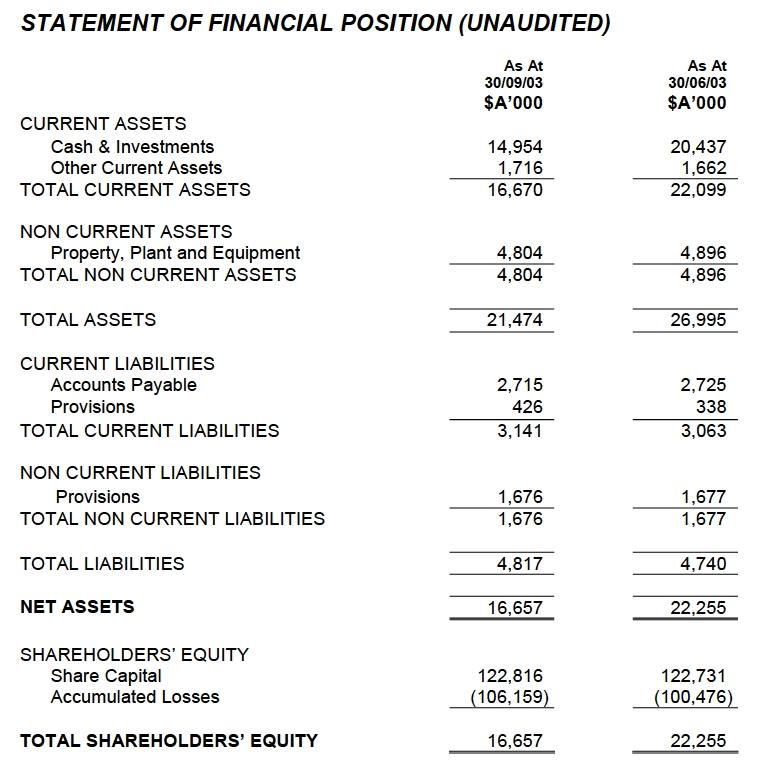