n this document, the term “resource potential” is used to describe the Company’s estimate of the contained ounces of gold which it believes, on the basis of a technical evaluation of available data and geological extrapolation, should occur within the New Bendigo. It is emphasised that this term is not covered by the JORC Code and is not equivalent to a Mineral Resource or Ore Reserve estimate.

COMPLETION OF THE 2002/03 EXPLORATION PROGRAM

Bendigo Mining has completed a successful exploration program that confirmed the resource potential of at least 13 million ounces.

The confirmation of the resource potential and Reserve estimate are discussed more fully below.

CONFIRMATION OF THE RESOURCE POTENTIAL OF AT LEAST 13 MILLION OUNCES

Re-estimate of Resource Potential The New Bendigo project was initiated by Bendigo Mining based on the insight that the gold reefs at Bendigo occur in sub-horizontal “ribbons” that repeat at predictable vertical intervals (ribbon model). Detailed studies on 5 of the 15 major lines of reef identified a resource potential of at least 12 million ounces of gold in the New Bendigo in 2000. The New Bendigo is the area beneath the historic workings to a depth of 1,500 metres.

Substantial underground development in the southern part of the field and drilling from surface in the north have confirmed the ribbon model. The Company’s understanding of the model and the geological controls of mineralisation has been demonstrated through the discovery and confirmation of new ribbons and gold bearing reefs.

Exploration in 2002/03 focused on gaining access to the shallowest part of the New Bendigo. Detailed exploration was undertaken within the D3 and S3 ribbons at the southern end of the field with the aim of defining sufficient Probable Reserves by December 2003 to support initial production. The results of the Company’s exploration program have shown a high degree of correlation with the resource potential parameters and the experience of over 100 years of historical mining.

The size of the reefs in these new ribbons and the contained ounces of gold are as expected from the ribbon model and correlates with the historical production records of adjacent areas.

The resource grade of 10 g/t Au is in reasonable agreement with the estimated grade of 10.9 g/t Au predicted for the resource potential in the areas accessed.

The confirmation of grades in line with the grades predicted in the resource potential estimates increases our confidence that grades will increase to the north beneath the higher grade portions of the Deborah and Sheepshead lines of reef and on the high grade New Chum, Garden Gully and Hustlers lines of reef so as to approach the average of 14.4g/t Au estimated for the entire resource potential.

The results of the sampling program has increased the Company’s level of confidence in grade estimation and as a consequence grade estimates are reported in 0.5 g/t Au increments rather than the previous practice of reporting a “best estimate” within a grade range.

The resource estimate is based on the results of diamond drilling (typically on a 40m x 5m pattern) supported by extensive sampling of development within the reefs. In the last 15 months the Company has extracted and processed in excess of 90 bulk samples and 850 x 50kg samples to assist with grade estimation. In total some 27,500 tonnes of material was mined from the reefs at an overall grade of 11 g/t Au (see table below).

A Probable Reserve allowing for grade dilution and mining losses is estimated to be 656,000 tonnes at 9 g/t Au for 193,000 ounces and is within the range targeted to support initial production.

The program of on-reef development, extensive sampling and close-spaced fan drilling, within the S3 and D3 ribbons was completed in November 2003. A highlight during the quarter was the results from the lower portion of the S3 ribbon, where some 200m of on-reef development in two strike drives, 30m vertically apart, yielded 11,000 tonnes of material grading 14 g/t Au, from within the larger resource envelope of the Greater Garrard reef. In many areas, reef material with large amounts of visible gold was encountered, grading well in excess of 30 g/t Au (1 oz/ton). The old timers called these high grade areas jeweller boxes and their presence in the areas investigated are further proof that the present day exploration results are in line with the historical experience of the gold field.

The project feasibility study is on schedule for completion at the end of January 2004. The feasibility study is based on a long-term mining rate to be around 30% above that previously estimated in the Conceptual Study of 2002, to over 1.5M tonnes per annum with a commensurate increase in annual gold production.
During February the directors will review the feasibility study and consider the best approach to develop the project as regards production build-up so as to allow funding of the project on preferential terms and to optimise shareholder value. The project development and funding strategies are planned to be announced in March 2004. 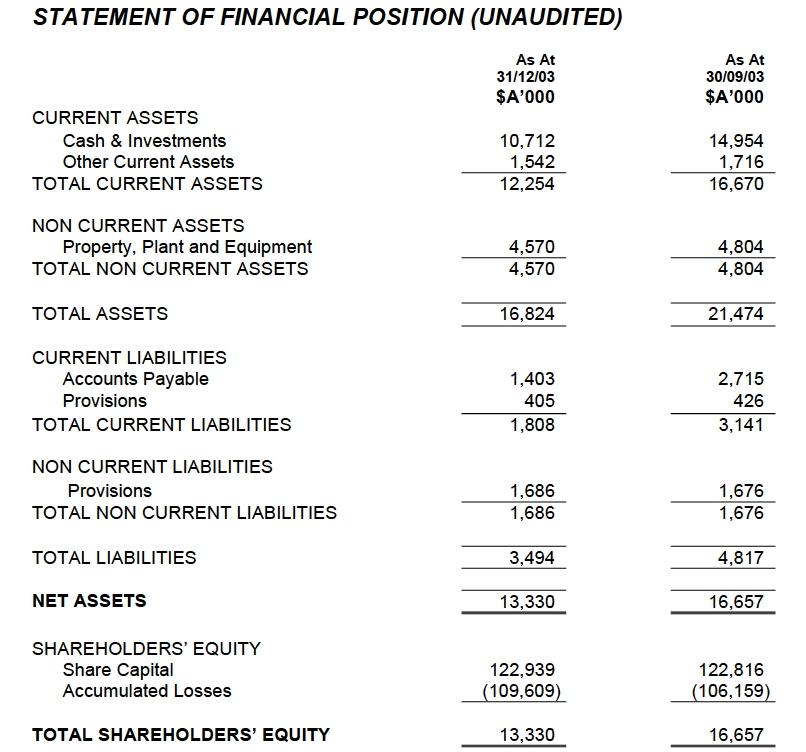